In every long term travel there comes a moment when you realize that the end of your trip is near. In our case, that moment was when we saw the Greek flag as our boat approached the port of Chios. Enough with the sad part though, let’s get back to the story telling.

Chios is one of Greece’s bigger islands and is significant in the country’s national history. Its varied terrain ranges from mountains to citrus groves but what it is known for is the fertile Mastihohoria in the south. This is the only place in the world where mastic trees are commercially productive. 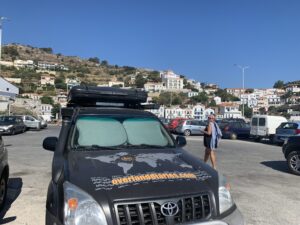 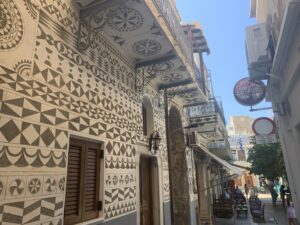 Our arrival in Chios town port, the island’s capital and home to almost half the island’s inhabitants was not long. Behind the city island’s busy waterfront lies a quieter old quarter, where some lingering traditional Turkish houses stand around a Genoese castle and city walls. After a quick look around, we took the narrow road that leads to the unique southern Chios, arguably the island’s best destination. Our first stop was the informative small Mastic museum, where someone can find all the information about the island’s unique tree. Although it grows elsewhere in the Aegean, the gum-producing mastic tree of Chios has for centuries been the sole commercial producer of mastic gum. This tree thrives in this fertile, reddish territory of rolling hills, criss-crossed with elaborate stone walls running through olive and mastic groves, a highly atmospheric area. 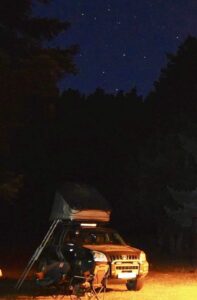 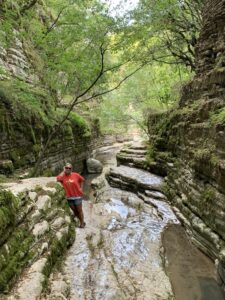 Located 24km southwest of Chios Town, we stopped in Pyrgi, Mastihohoria’s largest traditional village, with facades decorated in grey and white patterns, some geometric and others based on flowers, leaves and animals. This technique is called xysta and as we were told by one of the workers where we parked the car, it uses equal amounts of cement, volcanic sand and lime and a bent fork as tool. Pyrgi’s central square was flanked with taverns, shops and the little church of Agios Apostolos. While we were enjoying our daily coffee, a local pointed out a house that was not to be missed on the east side of the square. This is a house where a plaque attests its former occupant, Christopher Columbus, also a fan of mastic gum, but he preferred a different use for it, as a sealant in his boat construction. Six kilometers down the road southeast of Pyrgi we stopped in Emboreios, the old Mastihohoria’s port that nowadays is much quieter, with only Mavra Volia beach, named after its black volcanic pebbles, the only attraction for visitors looking for a swim. 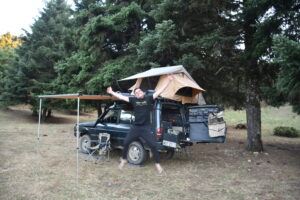 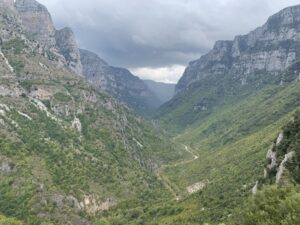 The next day, our Mastihohoria exploration continued in Mesta, a truly memorable but unusual village. Here, stone alleyways, beautiful decorated with flowers and intricate balconies, are completely enclosed by thick defensive walls. This is the work of Chios’ former Genoese rulers, who built this fortress town in the 14th century to keep pirates out. Mesta is an ingenious example of medieval defensive architecture, featuring a double set of walls, four gates and a pentagonal structure. Since the rooftops are interconnected, with the right guide you can actually walk across the entire town on top of them, something that reminded us of Iran’s Masulek. In medieval times, mastic was a commodity, prized for its medicinal powers, meaning Mesta had to be especially well fortified. Today, it is a quiet, car free, romantic place that can be used as a base for exploring the southern beaches and caves. Here, on the central square with its small cafes and restaurants, and the enormous Church of the Taxiarhes, I stumbled across an old school friend that now lives permanently in Chios. Apart from talking about old school stories, Martha gave us a good “must see” rundown of the whole island. 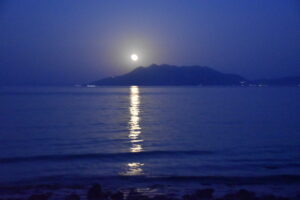 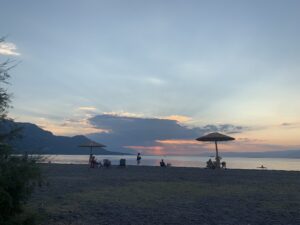 Thank you, Martha, for all your hospitality and detail information. I hope we cross paths again in the future. With all the information at hand, we headed to Vrontados, the site of Homer’s legendary stone chair, the Daskalopetra, a rock pinnacle close to the sea, where Homer’s classes were held. In Avgonima, we met a local overlander that spoiled us with fruits and vegetables from his own garden, before we reached the “ghost village” of Anavatos, with its abandoned grey-stone houses and narrow stepped pathways, built to protect its inhabitants from Turkish captivity during reprisals in 1822. After a couple of beach days in jaw dropping Elinda beach, we took the drive towards the craggy peaks of Mt Pelineo, Mt Oros and Mt Amani that mark the route to the North along the east coast. It is an astonishing trip through bizarre boulders and strewn slopes that seem from another planet. 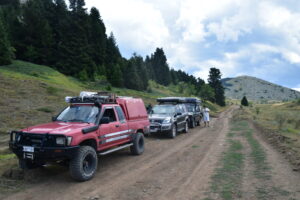 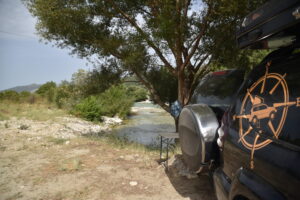 On the way we stopped in Volissos, Homer’s birthplace and Agia Markella Monastery, named after the island’s patron saint, before we found one of the best camping places near the cave of Agios Galas. Here, the owner of the small canteen allowed us to set camp right next to a crystal clear water fountain, under the shade of maple trees. Finally, after a couple of more days covering other minor highlights of the island, we boarded the ferry with destination the magical island of Ikaria. 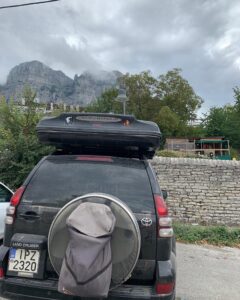 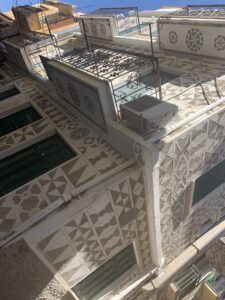 Ikaria holds the title as the most magical island of the northeastern Aegean because of its dramatic terrain that comprises deep, forested gorges, rocky moonscapes and hidden beaches with aquamarine, lobster-rich waters. Known from history as a former hideout for notorious pirates and other scallywags, Ikaria became a dumping ground for Communist sympathizers during Greece’s 1946–49 Civil War, as well as during the infamous coup “time of the colonels”, from 1967 to 1974. Its name comes from Icarus, son of Daedalus, the legendary architect of King Minos’ Cretan labyrinth. According to the Greek mythology, when the two tried to escape from Minos’ prison on wings of wax, Icarus ignored his father’s warning, flew too close to the sun and crashed into the sea, creating Ikaria – a rocky reminder of the dangers of overweening ambition. On another myth, Ikaria is also honored as the birthplace of Dionysus, god of wine. Homer mentions that the Ikarians were the world’s first winemakers. Coming back to today, travelers come here to enjoy the slow pace of life, the signature local red wine and the fresh, authentic local dishes, in a serene environment far from the crowds. If you are lucky, you might stumble upon a panigyri (annual celebrations of saints’ days) that involves a lot of food, drink, traditional dances and songs, combining Orthodox Christianity with Ikaria’s deeper Dionysian roots. 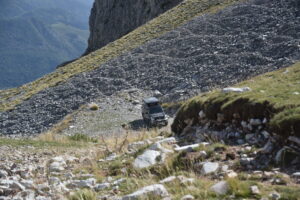 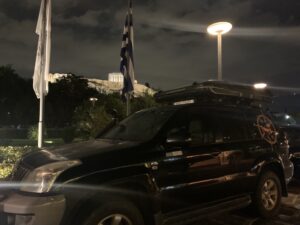 After disembarking in the middle of the night in Evdilos, Ikaria’s second port, we found shelter in one of the many churches that can be found scattered all over the island. The next day, we left Evdilos (our after a week departure point) and took a route that took us over the high mountain ridges to striking sea views and slate-roof villages before we reached Agios Kirykos, Ikaria’s capital. This place is an easy going small port, with clustered old streets, tasty restaurants, hotels and a lively waterfront cafe scene. From here, we visited the island’s top notch Seychelles beach, before we based ourselves for a couple of nights in a secluded beach near Fanari. Climbing back over the mountain, we headed to Raches, an epicenter of alternative thinking that attracts likewise thinkers from all over Greece. Back on the coast, we visited Armenistis, Ikaria’s humble version of a resort town that boasts two long, sandy beaches separated by a narrow headland with cafes and taverns, moderating the island nightlife. Finally, we returned to Evdilos and its surrounding bays for a couple of nights prior to our departure. Evdilos itself is quite picturesque, as it skirts a small semicircular bay with stately old houses and winding streets that end up to its relaxing waterfront. 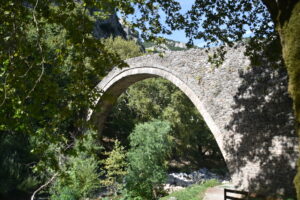 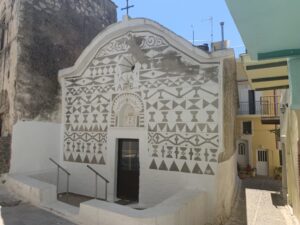 Next up was Mykonos, my second home (I have lived and worked here for almost 20 years) but unfortunately, after our water tank failure, we ended up  emptying 40 liters of water in Voukefalas interior and that forced us the next day to return to Athens. At this point of time and after a week’s drying and resetting everything in the car, we decided that it would not be fair for such a great trip to have that kind of ending. So we reset our gear in our vehicle and took a number of smaller trips around Greece, joined by other Greek fellow overlanders. From the Central Greece and the Oiti mountains, with Dimitris and Konstantinos, to the Peloponnese, with Nikos and Katerina, I had the rare opportunity, as we live outside Greece, to show Rochelle my own beautiful country. 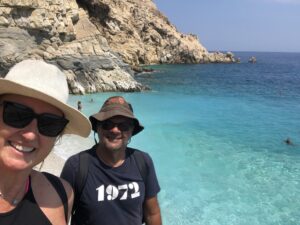 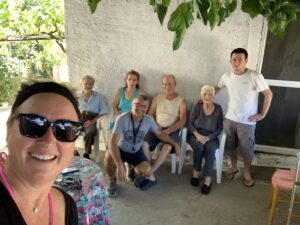