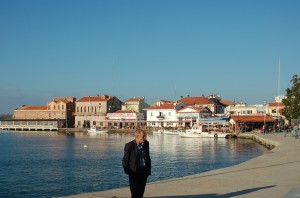 The time had come to pay an extended visit to my neighbourhood country which I had visited before but I was too young to appreciate it or had not seen Istanbul well enough. Turkey is the so-called enemy of my country but if you put aside the differences we have through history and religion, people wise we are very much alike. As soon as I crossed the border into Turkey I started feeling it more and more. 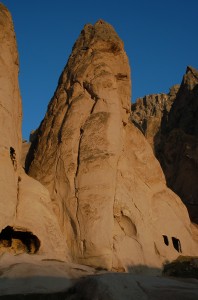 My first stop was not Istanbul as one would expect. First because I had been there for a couple of days the year before and secondly, a city twice the size of my country, besides the archaeological treasures that are really worth seeing, is polluted, dirty, chaotic and overwhelming, something I had faced during my previous visit there. So I decided to head to the southern side of the Dardanelle passage, the city of Chanacale, with its quiet waterfront that the locals run up and down chatting and joking with each other until dusk. I didn’t stay long there because Turkey is a huge country with a lot of different things to explore and my time was limited.
First thing in the morning after camping and almost freezing at night, at the near beach of Guzel Yiali, I visited the world known archaeological site of Troy, the mythical city that I was taught about in school in the poems of Homer. It’s a very old place of almost 4000 years. The site itself is a little run down and you have to imagine the great city of Priam than actually see it. The small museum at the entrance of the site was very helpful. After that I continued until Aivalic, a town that you fall in love with as soon as you step your foot into the lovely port or the small streets. I slept in one of the nicest caps that I have visited because of its location and the lovely family that was running it. I was the only customer there. It was the end of November and as all Mediterranean summer places it was about to close. The people, I think, kept it open for me or rather they reopened it for me. After paying a visit to Bergama, another great Roman city, I headed south of the city of Ismir, which I regretted, to the city of Seltcouk. It’s the base from where you explore Ephesus, the greatest ancient Greek and Roman city in the entire Aegean coast. The surprise was not Ephesus, where I spent almost my entire day and left at the same time as the guards, long after it was officially closed. 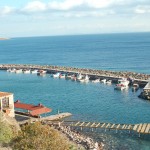 The surprise was the Homer hostel that I stayed at and was run by a lovely old lady. She didn’t speak a word of English or Greek and I didn’t speak a word of Turkish but we had some long conversations, each one using their own language but still managing to communicate. At some point it was really spooky and made me think that she was just pulling my leg. I really had a hard time leaving that place but I had to. The fancy Bodrum was next with its citadel and the protected port full of world class expensive yachts. Here I have to mention the Mausoleum, whatever was left of one of the seven wonders of the Ancient world. Just by the base that you see today, you can imagine how enormous the building was. I left Bodrum and after a short stop in Marmaris and in Dalyan with its ancient tombs, I ended up in Kas. 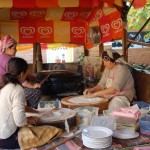 I had never heard anything about Kas and I had no intention of staying there more than one night but this place is a small paradise on the Mediterranean coast of Turkey. So from the overnight stop I ended up spending a few days there. I was lucky to have locals around me that definitely made the place come alive. I met them all on the diving boat that took us diving on the first day of my stay there. That was actually the reason that I delayed moving on in the first place. Yes, diving, despite the freezing temperature of the sea.
And since I mention the temperature, it was dropping rapidly since it was already December. So I moved on to the lovely Olympus, the tree house village. I literally mean that. The setting is ideal. A really dense pine forest reaches the beach where an ancient Phoenician city port was discovered. So all the way to the great beach the locals have turned the trees into rooms. 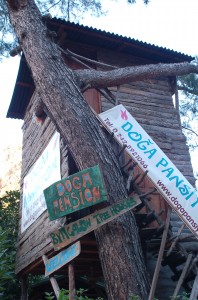 Yes, flying rooms. In order to go to your room you literally have to climb up the tree, open the door that is made out of trees and lie in your bed which is again made out of, you guessed right, trees. It’s an excellent experience and definitely something that you shouldn’t miss in this area. Are you still wondering? Of course I stayed in a tree house. As in Kas earlier, I had local company because it was some
Turkish holiday so the place was really alive. Turkey after Kemal’s revolution (he brought Turkey back onto the map after the falling of the Ottoman Empire and the end of the WW1) has loosened up many rules that other Islamic countries use. In reality almost everybody consumes alcohol, very few women wear scarves and the Islamic law is questioned. So in this case alcohol consumption started and with locals on holiday, the freezing nights ended up with great, warming up campfire parties. It was another nice surprise for me. The long weekend holiday was over for them and for me. Although I wasn’t working I followed their program but instead of going to work, I drove eight hundred stunning kilometres on the coastal highway in order to reach Antalya. I had a mission there. Some friend back home, whose family was from there and had to leave when the war started, asked me to bring home some sand as a gift from the past that was gone forever. Except that Antalya was a surprise to me because I really liked it and as you might have understood, I am not a city person. 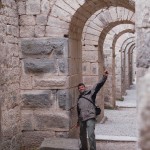 All this though stopped as soon as I left Antalya and went to Cappadocia, an open air museum as many tour operators call it. The highlands are full of caves that were formed a long time ago by volcanic ashes and the local population turned them into houses, shops, even whole cities. Small villages with a few inhabitants, a really unforgettable site and a labyrinth that only the small kids-guides can navigate you through it for some baxchis (tip). With me this time was Ocean, a 30 year-old guy from Ankara, that had lived in Spain for many years and after he was deported from Europe for smuggling, he ended up in Gureme working as a guide to the Spanish that make it this way. One of the unique experiences that someone can have is to check out the whole area flying with one of the hot air balloons, for sure an experience to remember. I didn’t do it because the weather was really windy. Instead, me and Ocean gave the crew Spanish lessons. You might laugh with all these things or even think that they are made up stories but this is the meaning of travelling, to do the unexpected. Surprises and even crazier stories took place during my stay but as a whole Cappadocia is a place that you should keep in mind, at least for me.
———————————————————-
09/2014
In 2014 I was back in Turkey for one more time but this time I was with my partner Rochelle.Some of the places were the same but some new ones were added.
For more details I am adding the links to the post on that crossing.You can click on them and a new window will pop up with a new adventure for you to read.

Chapter 5/Bulgaria-Turkey and the movie will be ….Heading East……

Chapter 7/Turkey and the movie will be ….Next stop….. Mediterranean Coast

This was our story about my ‘enemy’ neighbourhood country with its long coast, dramatic sceneries, excellent food and really, really nice and hospitable people. It’s the bridge between the East and the West, an area occupied by people for more than 4000 years. If all that isn’t enough to make you start planning your visit there then believe me, very few countries hold that much diversity to please even the most demanding traveller.
Please Share This