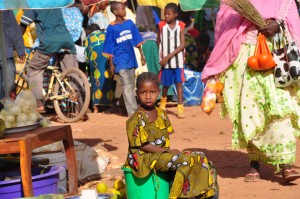 After only a couple of kilometres the first roadblock stopped me. After a lot of negotiations I got away with only some small change that I had left (I hadn’t had time to change money yet). On my way to the capital Banzul, I headed to Kololi, the beach suburb where the whole tourist infrastructure is. A tropical stretch of beaches targeting to package tourism, still though a nice break from my long trip from Europe through the Sahara. This is the main reason I stayed almost a week there hanging around with other overlanders, gathering and exchanging info. On my way to Gambia I had seen strange, custom made vehicles but the one that I saw there made by a Dutch was beyond imagination. He was basically living in it his whole life as he was away for more than 5 years. Ian, the Dutch owner, also gave me all of his GPS waypoints with details from where to sleep to where there was a good pastry shop. Bless him, he really saved me. I was surprised to find out that a part of the beach was known for male prostitution. Rich older ladies mostly from Europe come and pay for a local sex partner. Poor nations are so desperate that they find in prostitution the only way out of their misery. 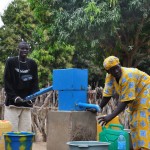 After all that time in Banzul my batteries were charged so I headed inland to get to know the real country. My next stop was Tendaba, with Kiang West National Park as its main attraction. There are lots of small animals there but don’t expect big things like the national parks of East Africa. The nature though awards you with some photogenic scenery of the river with many colourful birds as the main theme. The teacher of the village was a plus to the place. His name was difficult so I have already forgotten it. He kindly dropped the class to show me around. My sister and some friends of hers had given me some pens and books for the kids (Thanks, Cleo. The puzzle that your son didn’t like was a big success there). So as soon as his class was busy with the presents from the white guy, he was off with me. The class had 20 kids by the way and it was the only class of the school, no matter what the age of the students. After that it was time for JanJanBure or Georgetown. I decided to take the mud road since it was more scenic. After about an hour of a bumpy, dusty road I passed a roadblock with the officer sitting under a tree. 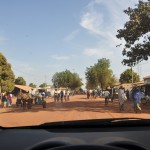 I slowed down but didn’t stop. He ignored me completely so I decided to go. As soon as I stepped on the gas he started shouting at me. I got out of the car and as soon as he mentioned an unbelievable amount of money, even for European standards, as a fine for ignoring the roadblock, I went over the limit. Thank God I remained cool and told him that I was not going to pay a single dime. With his “I am the law here” look he threatened to arrest me. The incident gathered many policemen from the nearby coffee shops. There I understood the power of speaking a language. In very polite but official English I explained to him that under the international law, a foreigner can be arrested only if he commits a crime or some other serious offence and not just for ignoring an officer’s sign to stop. So if he wanted he could arrest me illegally but he would have to explain why in court. By the way, thanks to Kostas Pistikos, an employee at the Greek embassy and a good friend, that told me all this. 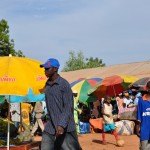 Then there was a moment of silence and negotiation between the policemen that were there who obviously explained to him that I was right. After a couple of minutes he gave back my passport and wished me bon voyage. The reason I describe all this is to make you understand that although for us the corruption is really frustrating, for the police officers of Gambia or any other African country, the extra couple of euros are probably life saving for them. So always be calm and show no frustration even though you want to kill them. Try to explain to them that their trick, although good, doesn’t work and they will drop any effort. Unfortunately this is something that you face in every poor country.
I think I got sidetracked though so back to JanJanBure and the really funny people I met there. I had a tour to the nearby school which by the way was not in a building but under a big Baobab tree. After telling them my story, the innocent faces of the kids, trying to understand why a white guy left his rich country to come to Gambia, are still in my mind. 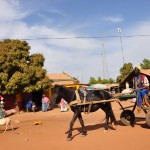 My last stop before going back to Senegal was Basse Santa Su, the second biggest city by Gambian standards. I spent the night there in a place called Tradition, an old hotel that my guidebook mentioned as the only place to stay at. The strange thing though was that the place had been abandoned by his English owner who had left only a guard to watch the property. No problem for me though. With my last Gambian money that I gave the guard, I had a whole hotel to myself and a guard for my car. A completely different aspect of what a small amount of money can do.
That was the end of my Gambian story. Don’t get me wrong. I really liked Gambia even for the few nice people that I happened to meet. The corruption was something I already knew and had faced before but even that added some spice to my adventures. For someone that comes from the “First World” and has seen the problems and the hopeless lives of these people, I can honestly tell you that the worst place for a human being to be in is that of a survivor. 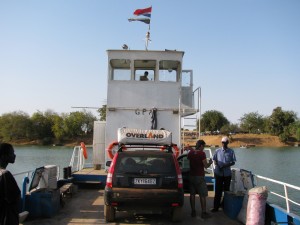 Moments to remember: The party at the school of Tendaba with the kids, the kindness of some Gambians I met and the literally crazy guy that found my hotel in Basse
Please Share This