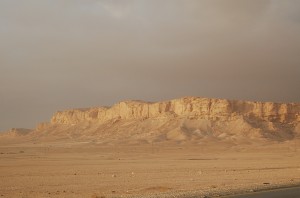 Syria. Every time I mention that name, people say: Are you out of your mind? Why did you travel there for? Well, I don’t know if I should tell them or not, since it’s better to stay away from some of these places for their own good. As a traveller though, I have the obligation to pass on information to others. So here it is. 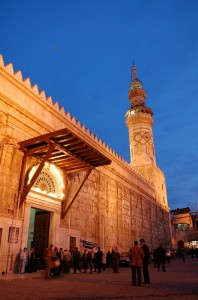 Syria is a book of history from the Ancient Greece to the crusades. It’s also a jewel hidden from the outside world because of the fanatic religious beliefs and the help to PLO, the organization for the freedom of Palestine before they gave Arafat world recognition.
When I crossed the border of Syria from Turkey, I felt like I was doing a free dive in the past. I arrived in Hallepo and before I even found my temporary home I was already in love with the place. Maybe my nationality had something to do with it (I believe because of historic reasons the Greek passport is the best for the Middle East) but I have never had such a warm welcome. On the first day I was already invited to people’s homes for dinner. On the second day I got a free detailed tour to the sights of Hallepo. I had to promise them I would go to one of their friends’ wedding in order to leave me on my own to do my exploration.
The wedding experience was excellent but shocking since it was the first wedding of my life (not that I have been to many) where there was not even a drop of alcohol but the fun was always to the maximum. From the shisha (water pipe) and the big amount of tea I danced a lot. Of course I became the centre of attention since they are not used to foreigners. I even had the honour of dancing with the bride, something that sounds normal to us but it’s a great honour that not too many people have, especially Christians.
I could talk for hours about Hallepo and my days there but I don’t want to bore you. 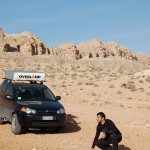 My next stop was Lantakia, a port on the Mediterranean. I met good friends there as well. I even hooked up with a young guy from England who kindly offered to share the gas with me If I l took him along. Gas is something of a joke in Syria because it only costs 50 cents there. (Don’t ask for unleaded, they have no idea what it means).
Something that a few guides mention is that Syria has the best preserved fortresses. All of them were built by the crusaders on their way to Jerusalem. Outside Lattakia was my first contact with one of them, the Qualat Shalahidin. Now you probably wonder why Salahidin (Salahidin was the leader of the Arab forces). Well, history is always written from two sides. So in this case Salahidin, after capturing the fort, re-established parts of it and made it his, against the second crusade that came from Europe. 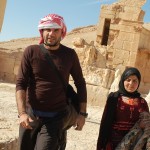 After that my target town was Hama, the city with the large water mills that have been used to drill water from older times till nowadays. Hama was also a base to visit Afamia, an ancient city that was built by a general of Alexander the Great and named after his wife Afamia. I have to admit that walking in an old city that your own ancestors built 1500 years ago does make your skin crawl. Just for the history of it, it was here that I came up with the name for my car, Voukefalas.
After saying goodbye to my English friend, the weather in this part of my trip (it reached 9 degrees) helped me make my decision to head southeast from where I had my first experience with the desert. But before that there was Crac de Chavaliers, a castle on the top of a hilly area completely untouched by time. When you cross its huge wooden doors you think that the knights have just left. It was a childhood dream for me. I remember I had a castle like that so you can understand my trip back to childhood. I ran up and down taking pictures like a kid that wants to bring home his first drawings. It’s the ideal place for dreaming in time. 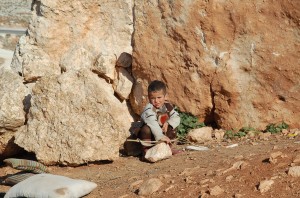 If the idea of watching the sun set over an ocean of sand, the contact with the Bedouins in the middle of the desert and an untouched ancient city in the far east, 50 km from the borders of Iraq sound scary, all this became my reality in Palmyra, my next stop.
It’s the main city of a queen that resisted so hard and was brought to the ground by the Roman Empire. 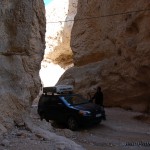 For three whole days I wandered in the desert visiting ancient temples and houses away one from the other and hidden under the sand for years to be best preserved for the astonished visitor. My place to stay, my tent above my car parked next to a tent of a Bedouin family, under the shade of a few palm trees. I ended up staying there after the invitation I had from the father. I had stopped there because it was the only source of water and I played football with his young kids. A couple of biscuits for the kids and I had the father inviting me to stay with them. Of course you never turn down such an invitation. The nights in the desert where there is no artificial light is something that once you live you will always remember. The silence of the desert is unique. Somebody once said that the desert is one of the most difficult environments to live in but once you give it time then all its magic appears to you. With these words in my mind I left Palmyra and headed to Damascus, the capital of Syria and of course a world heritage site by itself.
In the beginning the city noise after the desert days was not the best thing for me but after some time and with the help of the good company I had, this time from Europeans and not locals, I changed my mind. I even found a homey, a Greek that was living in Sweden and had the same idea as me to explore the “dangerous” Middle East. The history is everywhere in this city, from the small streets of the old town to the pretty Mosques and the fortification. You could get lost in the small streets of the souks (local markets) for days. Almost every ancient civilization passed through here and they all left a mark for remembrance. In the surroundings of the villages of Malula and Seytnaya I visited some Christian monasteries just to understand that all religions can live in harmony if their followers want to make it happen.

As a last stop on my way to the border of Jordan I had the honour of visiting Bosra. And I say the honour because Bosra, a small town, should be in every travelling itinerary. Why? Because it’s a town with no hotels except for a five star hotel out of town. It’s the kind of place where you ask around: Hello, do you mind if I spend the night in your house please? I have nowhere to stay. Does it sound exciting? It gets better. The house you stay at is probably there for hundreds of years and has been renovated in the traditional way over and over again. As for me I found Zachariah, a local who ran a small tavern at the edge of the old town. I camped in the main square, next to his tavern in order to have a bathroom, only to find out with the first morning light that I was next to a fortified coliseum (the reason tourist buses come here) and the mayor of the village wanted to meet me. The reason was that before he became a mayor, he had managed to sneak into Greece and worked in a farm picking lemons and olives. He had the best memories and he was wondering if I had a farm so he could come back and work for me this time. What a small wonderful world we live in! After all that you can understand that Bosra except for a sweet goodbye made it to the top of my Syrian adventure.
Time has shown me that dangerous countries don’t exist. The only thing that does exist is dangerous minds that make dangerous people. Syria for me is one of the top destinations in the globe. As for the fanatical religious Muslims that I was told about, there are two types: the ones that understand the Koran and the ones that understand only what they want to understand from the Koran. My path brought me only close to the ones that understand the Koran. And as all holy books, the Koran talks about loving and living together and not about killing and enslaving minds. 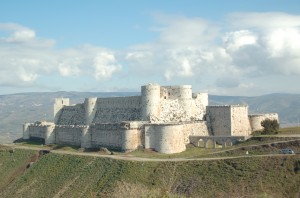 Best moments: Bosra as a whole of course, night skies in Palmyra and of course my Bedouin family that although for a small amount of time was my Syrian family.
Please Share This