The name is Senegal, the landscape is prosperous, semi sub-Saharan and the inhabitants are Black African, French speaking. At the hotel where I worked in the summer of 2009, before I even thought of travelling to West Africa, I met Cise, a half Guinea-Bissau, half Senegalese and a political refugee who makes a living in Greece. When I started planning my trip, Cise gave me all kinds of information about the region and before I left for my adventure, I found out that he would be in Senegal as well. Great start for the unknown lands that I was heading to. 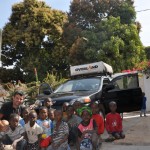 The entrance to Senegal was through Roso, the notorious for blackmail border post. This includes the crossing of Senegal River which for foreigners can cost from 25 to 300 euros, for the passengers and the vehicle. It depends on the mood of the boat keeper. As for me I didn’t hesitate for a minute. 20 km before the border, I took the dirt road that runs parallel to the river for about 100 km, until a small wooden bridge. It costs only 5 euros to get the Mauritanian guard to lift the bar and let you through. That doesn’t mean that the adventure is over. I approached the Mauritanian border, I had another 30min fight with the officer and I got away with paying only 3 euros to Customs and 5 euros to the police, after blackmailing them that I needed a receipt for any bigger amount than that. So 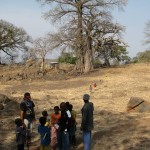 I was off and away from Mauritania. The Senegalese guard was more difficult but I got away with only a couple of pens as a gift. (Thanks to my sister and her friends I had a lot of those for the kids). At the Senegalese border post, thanks to my Carnet de Passage I got away without any big losses, another 3 euros if I remember well. So 16 euros and lots of time for unnecessary talks and negotiations and there I was. Welcome to the Black Africa.
My first stop was San Luis with the iron bridge made by Eiffel (the same man that built the tower in Paris). On the way to the city there was a roadblock. 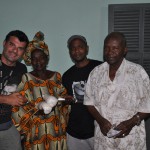 “Why is the car not registered in the passport? You have to pay a fine”. Not again. No, I didn’t hesitate again. “Me tourist, don’t   understand French”. Ten minutes later, after my nerves were shot, they wrote something in my passport and let me go. In Africa you need to have patience because they just try to get anything out of you. As for San Luis, finally women not covered at all. Quite the opposite, I must admit, very playful. People in general were helpful and happy, although very poor. I spent one night in my tent, in one of the small streets of San Luis and the next day, after a long walk in the streets, I headed to Ganiol, a national park with a beautiful setting and a great camping next to the ocean.
I met some interesting people there but the most impressive was a guy from Sweden who had gotten there on a bicycle. Yes, that’s right, a bicycle. See, there are people out there crazier than me. 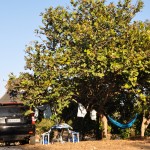 After that I headed to the capital Dakar where I thought I would meet my friend Cise. That didn’t work out but Cise hooked me up with his sister and his nephews who by the way spoke English. They took me into their home after paying someone to watch my car. The guy literally slept under the car for just 1 euro. So there I was, a white guy in the ghetto of Dakar. I wouldn’t even have imagined passing through it. It all changes as soon as you know people. The next day I had to arrange my visa for Mali. Abdoulaye helped me find the embassy and even had his younger brother take me there. 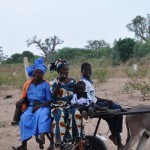 Here I have to mention something to make you understand how small the world is. At the embassy I was wearing an old T-shirt with Kastro Bar Mykonos written on it, my previous job in Mykonos. Suddenly I heard behind me “You are Greek as well”. Astonished I turned around and saw a lady. Yes, I said. She looked at my shirt and said “Hey, wait a minute. You are Yiannis from Mykonos”. Yes, she was a Greek lady that I had never met but we communicated with e-mails the previous year in Jordan. She and her husband, the Koch family (he was German and she had moved there) had actually given me great info about the crossing from Jordan to Egypt. And now they were heading to South Africa with their huge truck. What a small world!
All these incidents and the marriage of one of Cise’s nieces got me busy for New Year’s but I had to go on. Cise was at his mother’s place, the city of Kolda, about 500 km away but still on my route. So I left Dakar and paid a short visit to Sally Portugal and Nianing, two resorts on the Atlantic Ocean. New friends there, more interesting stories and lots of beach bumming, but my target was Kolda, the place where Cise made me part of his family. As his mother was supporting a big country house and a religious school for the area, I became the centre of attention for more than four days. Every day my morning job was to go out with a bunch of kids from the school and get them all something to eat. A great place that became paradise thanks to Cise and his hospitality. At night we had long talks about life surrounded by a group of local teachers and exchanged ideas. Kolda was a highlight for sure but the trip had to go on. 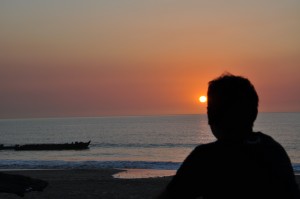 Back to the coast again, then to the Casamace region, an area known as the most beautiful of all Senegal. Cap Skirings was the name of the village where I first stopped. A real Senegalese place with touches of western culture, as a lot of French had made it their home. After a long period of time I was doing nothing all day and I really enjoyed that. Another place that people told me about on my way there was the sleepy fishing village of Kafoudine. What a remarkably blessed place! My base was a lodge camping and I gave myself five days off. I also had my little adventure with a local girl and lots of beach reggae parties. So I kept myself busy. 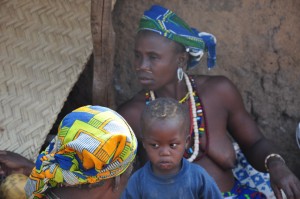 After that pause it was time to head inland on route to Mali. Two places are worth mentioning.
The Niocolocoba National Park, near Tabacunda, where my Voukefalas went on his first safari,
and the small town of Kedugou, very close to the Malian border, where another safari took place in the Basari tribe country. Their small villages are climbed up on the rocks for protection because Casamace was the centre of a regional conflict. The harassment from the corrupted police didn’t stop but I don’t mention it all the time since I always managed to get around it and you’ll get bored with all the incidents. That helped me decide to leave Senegal from a border crossing less common to the tourist track. So after a dirt road I reached the border post into Mali and had to say my last goodbye to Senegal. 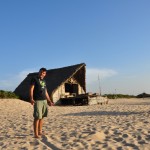 My visit there was definitely a highlight in the West Africa trip and I wish I could have given more help to all the beautiful people that came across my path. Thanks a lot to everyone out there for all you did for me.
Moments to remember: Bounama Cise and his cousin Baba with all the knowledge and religion ideas we exchanged, my meeting with Katerina and Rolf Koch and of course all the anonymous, poor people who opened their humble homes to me. 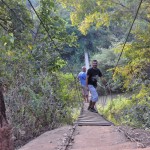 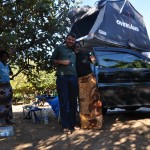