It was 8:30, on the morning of the 25th of April 2015, when Anja and Hauke from Germany on their motorbikes, Ronald and Rini from Holland in their camper and Anand, Punita,Yash and Dhriti, the Baid family from India, together with us in Voukefalas, rolled out of our camp and drove the last 12 km to the small village of Kodari and the Nepalese border. We were all extremely happy as our China overland trip was about to start. 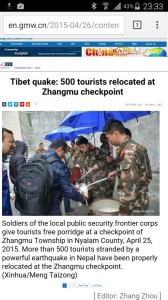 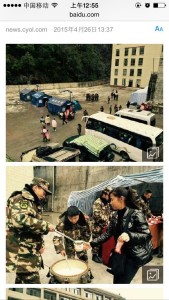 As we were going through the last border formalities, about to stamp our Carnet de Passage out of Nepal, we could not imagine what was about to happen. We drove our vehicles on the bridge over the river that separates Nepal from China. There the passengers had to get off and cross the bridge on foot. We remained with the vehicles for 45 more minutes before we were also called to leave our vehicles on the bridge and proceed on foot to the Immigration Office on the Chinese side. While we were in the building, the first strong earthquake hit. As we all started running out of the building, we saw the sides of the mountains that are separated by the river’s valley collapse and boulders almost as big as a truck come down on us. The moments that followed were horrifying. 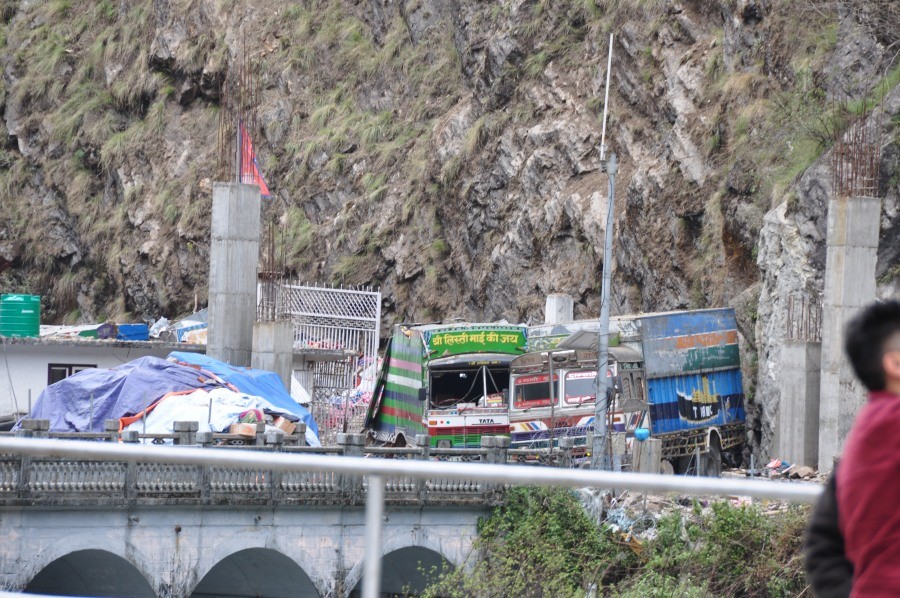 Rochelle and I managed to stay together as the rest of our group started running in every possible direction. Out of the corner of my eye I saw rocks falling on the bridge 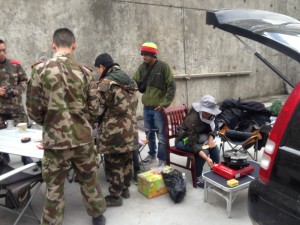 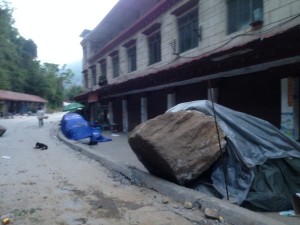 and a cloud of dust covered our vehicles that were still on the Nepal side. I’m not sure what exactly went through my mind at that moment but I told Rochelle to wait in an open space and started running towards the bridge. As I looked around, I saw Ronald doing the same. We both managed to drive our vehicles to the Chinese side where the rock falling was much less. Then the aftershocks started almost as strong as the main earthquake and made us run towards a basketball court, the only open space we could see in the area. The Chinese border army kept us, together with another 100 people, in the centre of the court that was safe. With only minutes apart, the aftershocks continued causing more and more stones to fall, giving everybody the feeling that it was the end of the world!!! 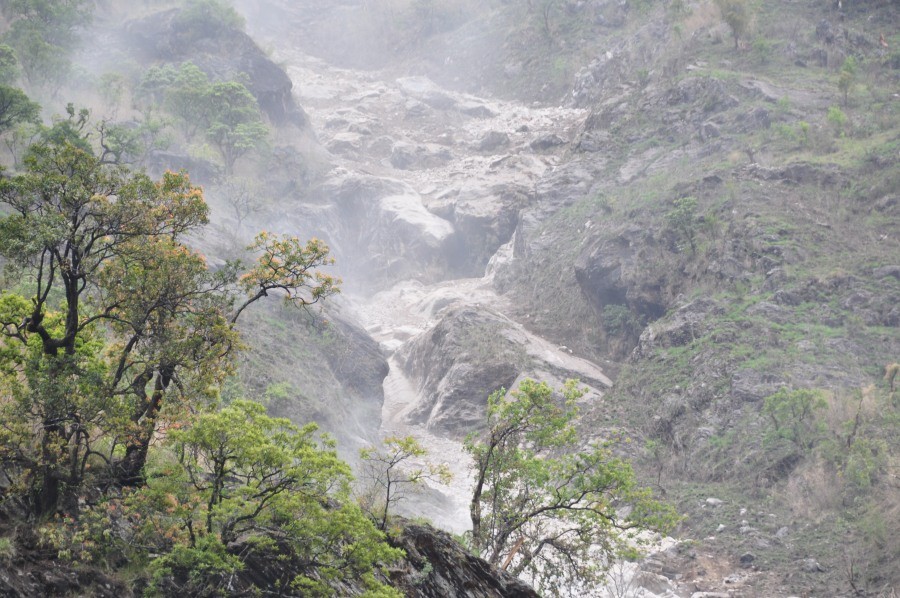 Luckily enough we managed to communicate with the rest of the group. They had found shelter in the opposite direction and although they were all terrified, they were fine. As we waited, we could see huge rocks continuously falling on the bridge where Anand’s car was still left. When the aftershocks seamed to stop and probably without  much thinking, I ran all the way to the car and drove it off the bridge, in the safety of the Chinese side, together with the other cars. No-one had much time to think until that moment but suddenly we realized what had happened. As the night was falling, light rain made the mountain even more unstable and from time to time caused it to collapse, spreading fear to all of us. 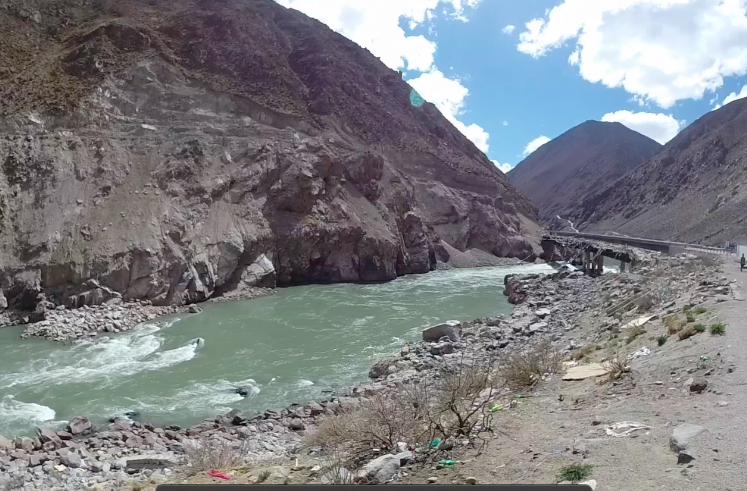 The army, that had taken control of the situation, started preparing the emergency tents to accommodate the Nepalese and Chinese that had found shelter there. As we reunited with the rest of our group, we were allowed to drive our vehicles and set up camp next to the other tents. Many people and some damaged but still moving vehicles showed up from nearby areas and a camp of 200 to 300 people was set up. For the rest of the night the emergency whistle must have sounded more than 20 times, indicating more rock falls and constant aftershocks and ordering us to abandon our tents and gather in the safe assembly point, in the centre of the court. 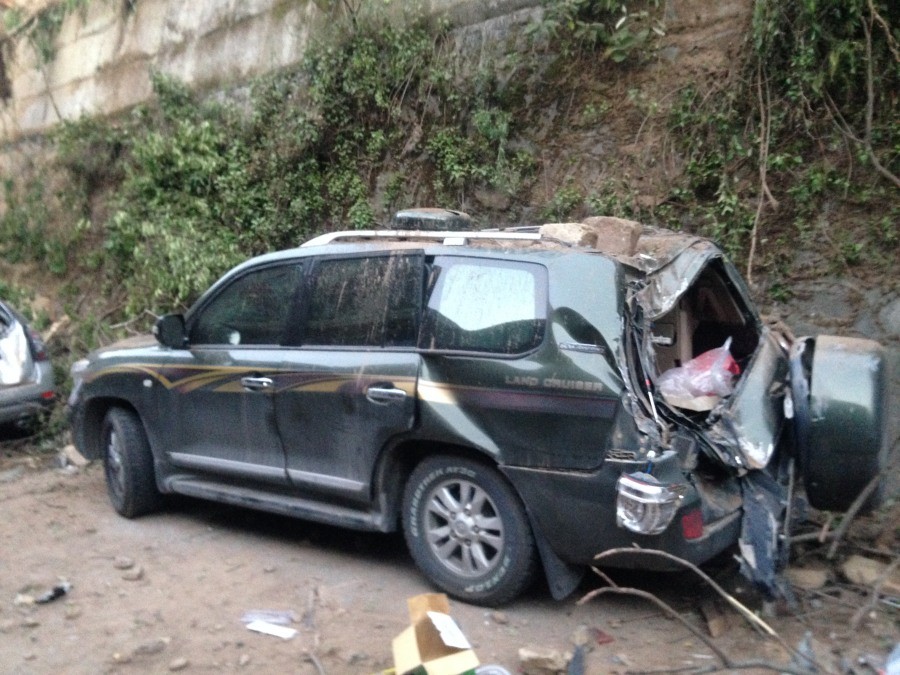 None of us slept that first night since aftershocks or rock falls were going on all night long. With the first daylight, the army set up more emergency tents and some basic facilities in order to accommodate the survivors that continued to arrive. We are grateful to all these soldiers and their officers that managed to handle this difficult situation. They kept everybody safe and made sure that we had something to eat and all the necessary assistance for the next four crucial days and nights. They even sprayed us with chemicals every four or five hours to contain disease outbreaks. 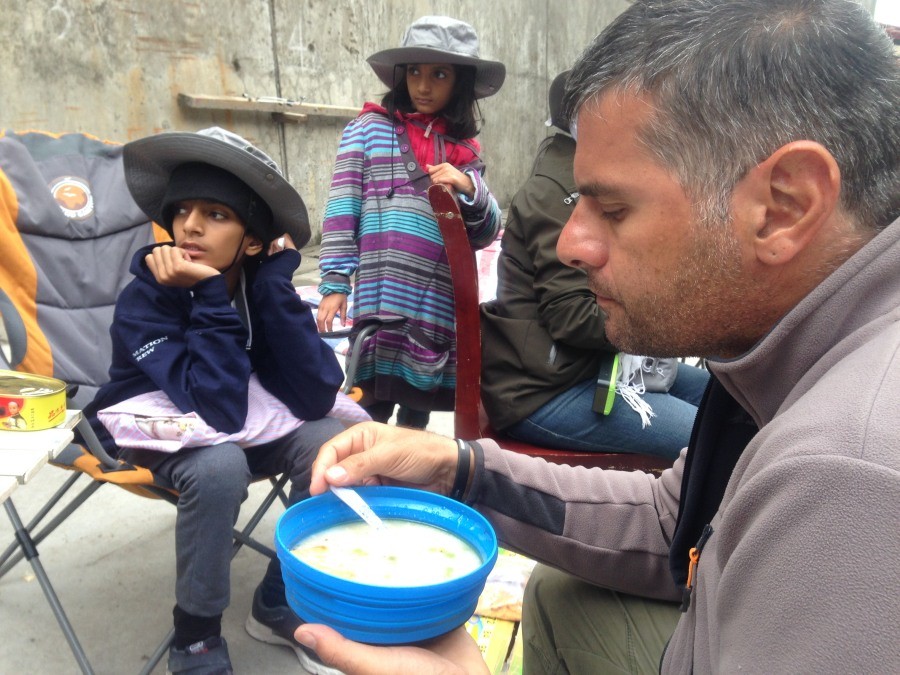 Although deep in the river valley and with the mountains rising sharply above our heads on both sides, we had no victims and nobody was even wounded. Overwhelmed by our fear, we had not realized the huge disaster that had occurred. Cut off from the rest of the world, as communications were down, we had no clue of what was going on in Zangmu, only 8 km away or in the rest of the area. The sporadic rock falls and 4 or 5 more aftershocks continued the following days, giving us no option but to wait and stay alert. Through our satellite communicator we slowly started finding out the size of the disaster that had hit majorly Nepal and on a smaller scale China.

It was on the fifth day that the army ordered us to abandon our cars and all of our belongings. With only some water and the absolute basics, we started hiking up the road 8 km to Zangmu as it was no more safe for us to stay there. The order was strict and left us no other option but to follow it. Along the way, destroyed vehicles and huge stones had blocked or completely destroyed the road, making it impossible to pass even on foot. As we ascended fast and approached the village of Zangmu, we realized what had happened. Almost 70% of the village was completely destroyed and we were told that more than 40 people had lost their lives already. There was a strict order for evacuation of not only our camp but of the whole area. Every survivor had to be moved to camps that the army had set up about 200 km away.

We were loaded to a 4×4 police truck and started driving up the dangerous, steep, destroyed road from1200m to 3000m high, in only 38km and onto the safety of the Himalayan plateau. It was during those hours that we all went quiet and faced the brutal reality. We were probably some of the very few lucky ones that had made it out of there alive. The earth had opened in two pieces and had swallowed everything that was on the surface. We had left behind our vehicles but others had left their whole 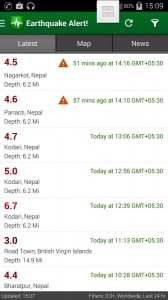 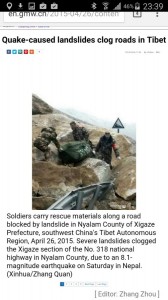 lives that in less than an hour disappeared from the face of the earth. After driving for almost 12 hours, we were brought to Lahze, in an army camp, together with thousands of others.

More than 7,500 people have died as a result of the 7.8 earthquake that struck Nepal on April the 25th. The death toll could rise even higher, as thousands of people are still missing and remote villages are out of reach. More than 120 aftershocks left behind 14,500 people injured in the disaster which caused buildings to collapse. At least 2 million have been displaced. Fifty-eight camps have been set up to house roughly 37,500 people who have lost their homes. As a tribute, we dedicate this post to those who have lost their lives or their homes, wishing the survivors to reunite with their beloved ones as soon as possible.

P.S.Excuse us for the quality of pictures and the footage be sure that under the circumstances we did our best .