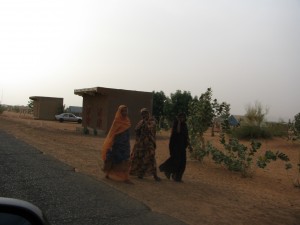 Mauritania is the country of great opposites. It’s almost half the size of Europe but still with about 5 million inhabitants. Why? Almost 80% of it is covered by the Sahara desert with just as many cities as the fingers of your hands. This huge no man’s land was the only thing between me and West Africa. I had to cross it although the news about kidnappings of foreigners for ransom had reached my ears. Thanks to my friends Akis and Voula, I already had someone waiting for me in the first big city, right about 100 km from the border with Morocco, to give me some courage. 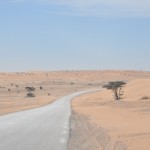 As for the border, after taking care of the details on the Moroccan side, you have to drive about 20 km in the dead zone. That zone is literally dead, with absolutely no road and no other reference points to figure out where you are supposed to go. It’s an area full of abandoned cars either from bandits or drug trafficking, a scary sight when you enter the country. After the good old trick -always follow the local, he knows more- I got to the Mauritanian side. The procedures were pretty straight forward, with the expected requests for gifts which I have learned to avoid one way or another. 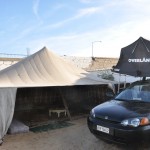 So here I was, in Nouadibou, the second biggest city and financial backbone of the country. As my good friend and mentor in West Africa, Kostas Pistikos, had told me in Rabat, I gave immediately a phone call to Nikolas Georgiadis, my contact in Mauritania. He was a Greek that had left Greece to find a better luck abroad. Nikolas took me in as his brother although he was extremely busy buying fresh fish and shipping them to Greece. Thanks for that, Nikolas. I hope your leg is much better now. I stayed at the only camping in Nouadibou, owned by Ali, a guy that had something to say for everyone and everything. He was a show to watch, a real Sahraui (the original inhabitants of Western Sahara). 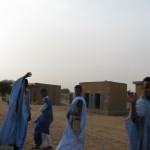 While I was there for Christmas, another kidnapping took place on the road I was supposed to take on the way to the capital Nouachsoht. At once the word got around at the camping and we managed to form a convoy of cars for the next day’s 500 km. A couple from Portugal with an old Mercedes 190, that they would sell in Mauritania, and a group of English guys that had bought two cars on E-bay, 1000 euros for both, with the plan to drive them to Cameroon and sell them there. What a team! The next day Ali informed us that every 100 km there were roadblocks for the tourists’ safety and every time we would have to register ourselves and our cars all the way to the capital. That was a relief. So we had four cars in a convoy, with Voukefalas up front. Great sight, I am telling you. All the way to Nouachsoht with no stop, not even to pee, except at the roadblocks. 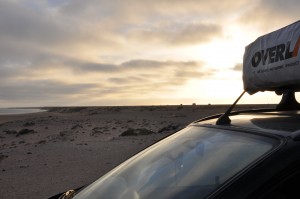 Our base was the camping In Nouachsoht, the same as Ali’s. It’s not a real camping but basically a house with rooms and a big yard where foreigners set up their caravans. Before the nightfall more cars had joined in, coming from the opposite direction, from the south. The news was good, the road was safe and because we were too many we had a big traffic jam in the yard and became all friends.
I have to mention here that no car entering Mauritania is registered so most people sell their old junk cars there instead of throwing them to the garbage. 9 out of 10 cars are Mercedes 190, some of them with 2 million km. I had to see it to believe it. They may have no doors or windows or some of them may have custom made seats from old chairs but they are still running. 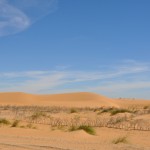 The next day I said goodbye to the crazy English guys and the lovely Portuguese couple since they went on and I decided to explore this dusty, ugly, dirty capital with a unique character though. I walked on the waterfront where the fishing boats came in loaded with fish and I smoked a sisha (water pipe) at the central, men-only cafe. The women, although hidden under many clothes, appeared to be really good looking, from what I could see anyway.
After a couple of days I crossed to Senegal only to come back after 4 months on my way back to Europe. Then I had to go to the notorious south eastern part of the country. But except for the fact that I had to stop every 80 km at a roadblock and give my papers,
it didn’t seem dangerous at all. The only treat was the huge hall that appeared out of nowhere in the middle of the street. At the end of the 300 km was the city of Kiffa, my pit stop for the night. At the first ten roadblocks it took the officers 10 minutes to understand and write down my records. After that I had already written down the info. So I just slowed down, gave them the paper and moved on. 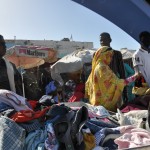 In Kiffa I stayed again at a camping but this time I wanted to stay in one of the rooms. Great idea, the house door was open and they pointed out a corner of the house, with a mat on the floor. Besides that though, the owners were really interesting. He was a local guide and she was a teacher at the nearby school. I had a big lesson on the country’s past and present that night, over a chai (tea) before I went to bed. After that, another lonely 400 km and again back to Nouachost and from there back to Nouadibou and Nikolas for a great goodbye lunch, while his people were servicing Voukefalas. 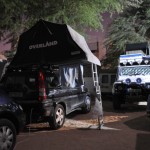 Mauritania isn’t full of sights or great adventures but just the ride in the Sahara, in the middle of nowhere, is a thing to remember, as well as the feeling of freedom and the sense of how vulnerable humans are, when nature shows its force to dominate above all. This is what will stick in my mind about Mauritania.
Moments to remember: The talks with Ali, the greek hospitality from “the fisherman” Nikolas and the lonely 300 or 400km drives in the Sahara. 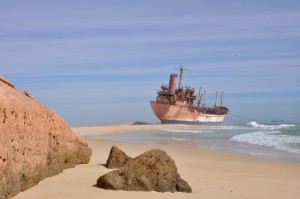