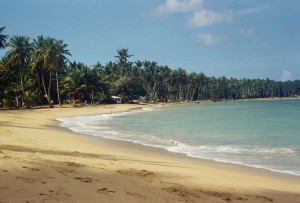 The island of Espanola is divided in two pieces nowadays. Back in the colonial times it was controlled by the Spaniards as it was their first settlement in the New World. It was the first place Christopher Columbus discovered and that made it my travelling destination in the Caribbean.
Today half of the island belongs to the Dominican Republic. Those were the early days of my travels back in 2001 and the fact that it’s an island made me want to go there. I packed only a few necessary things and met a friend of mine, Iro, at the airport. Iro would only come with me for ten days and after that I would continue by myself. 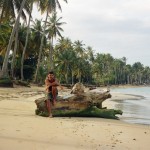 After a long 8-hour flight, with a stopover in Paris, we landed in Santo Domingo, the capital of the small Spanish speaking republic. It was the first time I had seen a colonial city. I was impressed by the fact that the old part of the capital had old buildings still standing and being inhabited even today. The tourist industry has left its marks on the island but at that time it didn’t really matter to me. It took us three days to explore the city with Samuel, our devoted guide that we picked up from the main square where they all hang out. After a tour to all the historic parts of the town, Samuel made sure that Iro and I were not a couple. So he decided to take us to a Merenque bar (a brothel) as part of the things to see in Santo Domingo. He explained to us that whatever sex fantasy we might have would become true in there. Funny stuff, especially when Iro found herself surrounded by all those girls asking her what they could do for her. Anyway, we had great laughs about it, so it was worth the experience.

Since we went to the Caribbean for the beaches, we couldn’t wait to head out to the closest beach resort of Boca Chica, basically a stretch of land into the light blue waters of the Caribbean. If two days of sun and fresh shrimp cocktails right on the beach, don’t sound interesting to you, add the party nights and you’ve got a vacationer’s paradise. We had some great meals at Leo’s street cantina where we literally ate on the sidewalk. Leo, a local creative chef, decided that a five-star hotel wasn’t the workplace where he wanted to spend the rest of his life. So he took his knowledge and brought it out in the street for us to enjoy. 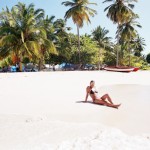 Something worth mentioning here is the damage that the all-inclusive resorts have caused to the tourist industry. For the first time Iro and I saw huge areas that were isolated from everything around them and turned into humongous hotel resorts/prisons. Their customers wouldn’t even go out to see what the real local life looked like. They all had sparkling bracelets on their wrists so they could be separated from the rest of us and they could consume for free everything that the resort had to offer. That was a really sad thing to see. After all that we decided to skip the east part of the island since it was the area of the all-inclusive resorts. The antidote for all that was in the north, the Samana Peninsula. The area is protected as a national park and that saved it from the big resort companies. When I got off the bus and looked around me, I finally felt the Caribbean. Yes, this was the Caribbean as we imagined it back home. Iro agreed that after the colourful local buses playing loud music and the odd crowds of the resorts, it was time for some peace of mind. We took long walks into the rainforest. When you get tired, you stop under the palm trees and cool yourself in the crystal blue Caribbean waters. Samana was our base for exploring the area in a small boat. Cayo Levantado was a small island like the one in the movie “Castaway”. Samuel Part 2, as we called him, was the only person living on the island and had a small canteen with just the basics for the tourists. We also visited the second best beach on Lonely Planet’s list, Playa Rincon and we both agreed on that. We had lunch right on the beach at a self-made canteen. Fresh lobster and salads on the beach were on our menu cooked right there on a fire they lit up on the spot. The food we shared with our gua-gua driver, Ernesto, was probably one of the best things I have ever tasted. To get around the Dominican Republic, you have to use a gua-gua. It’s a scooter you can find in a split second since they are literally at every single corner, with their drivers willing to take you anywhere at the right price. That was our main transportation and it took us to places where public transport didn’t exist. Some of the drivers are really bad and aggressive and they overcharge foreigners but others are really helpful and friendly. That was the case with Ernesto. Our next stop on the island was further west and always on the north part of the island, Las Galeras. It was the same setting as Boca Chica but with no resorts, targeting the independent traveller. What were the things to see and do there? Relax, this is Mar Caribe. If you don’t enjoy the beach, go to the nearby cliffs and enjoy the really fresh fish that the small seaside restaurants offer every day. 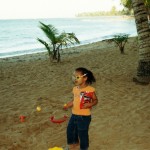 After our short pit stop it was time for Las Terenas, another beach village with unique setting that the Dominicans know how to make even prettier. Late in the afternoon all the small bars right on the beach took out their tables and lit beach fires. It was an incredible sight and the funny part was that the tide moved back at night so everybody moved their tables further down and closer to the sea. That was Iro’s last place to visit since her trip was over but the place was ideal for her last night.
The next day I said goodbye to her and headed inland, to Jarabacoa, since I needed some adrenalin after all that beach bumming. The national park of Bermudas y Ramirez was my tropical rainforest destination and after spending a few days of trekking and sleeping in the wild with my hammock, one night I had to fight with a tapir that was after the only food I had in my backpack. After a few days in Puerto Plata, I decided to spend my last days there as I started. So I went back to the south to be close to the airport and headed to the village of Bayahibe. There I met a very nice lady from El Salvador who I met again in San Salvador, the following year that I visited Central America. Besides that, I spent the last three days on the beach. 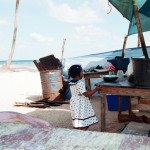 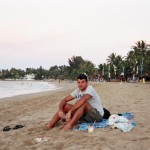 Many people say that the Dominican Republic has nothing to keep you interested, except for the prostitutes and the expensive resorts. That is a big lie. At every destination you see what you want to see. So I am not saying that those things don’t exist but I saw a country much more original and definitely much more exciting than just a nice resort with paid sex.
Please Share This