We left you hanging on what happened in our last days in Haifa? Most of our time was spent on daily walks, some admiring the views from the top of breathtaking Mt Carmel and others within the urban center where the city’s landscapes, not always beautiful, kept us busy.Even at the end of our trip though and while we were organizing our final approach to Greece, something unexpected was meant to happen that made us change our plans.

Our original plan was to ship to Cyprus and explore the island, cross into Turkey and then make our way back to Greece. After arranging our air fares to Cyprus and book Voukefalas’ boat, the day came to deliver the vehicle to the shipping company. 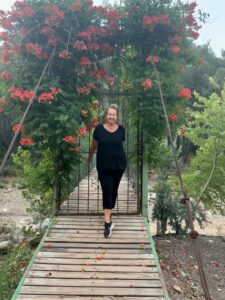 Well, that is where things took a turn. During the process and while we were waiting for the final boarding papers, in order to deliver the car in the port, our shipping agent told us that although Cyprus is part of the EU, the vehicle still had to pay extra import tax. He also mentioned that in order to avoid that, we could ship directly to North Greece (Thessaloniki) with the same boat and drive from there back to Turkey where we wanted to go. We were also told that our exit point from Cyprus, a non recognized border crossing (The Republic of Cyprus does not recognize the Northern part as an official country) might cause some extra issues in Rochelle’s return back into EU. Those two simple things were enough to make us reconsider. Loyal to the overlanders’ way “Always Prepare for the Unexpected”, we rebooked the vehicle to travel to Thessaloniki this time and got ready for our three nights holiday in Cyprus, while Voukefalas was on transit. The roller coaster of constant change of plans was meant to continue till the end. 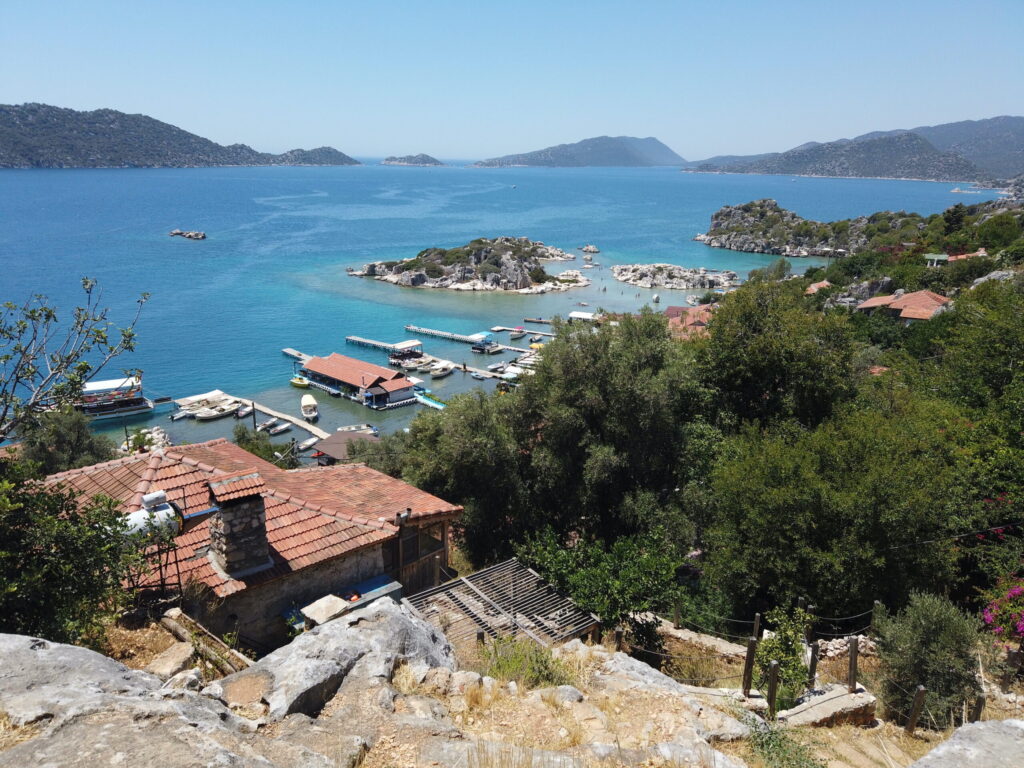 The next day and with our vehicle gone, we boarded the plane northbound to Cyprus. Our destination was Larnaka, the city where everything revolves around its seaside position. The lively coastal promenade called Finikoudes is where you can see locals and visitors alike, either for a morning coffee and hanging out on the beach during the day or an evening beer and a stroll for sunset at night. This is the hub of the urban scene with restaurants, cafes and bars that all fill up during summer. 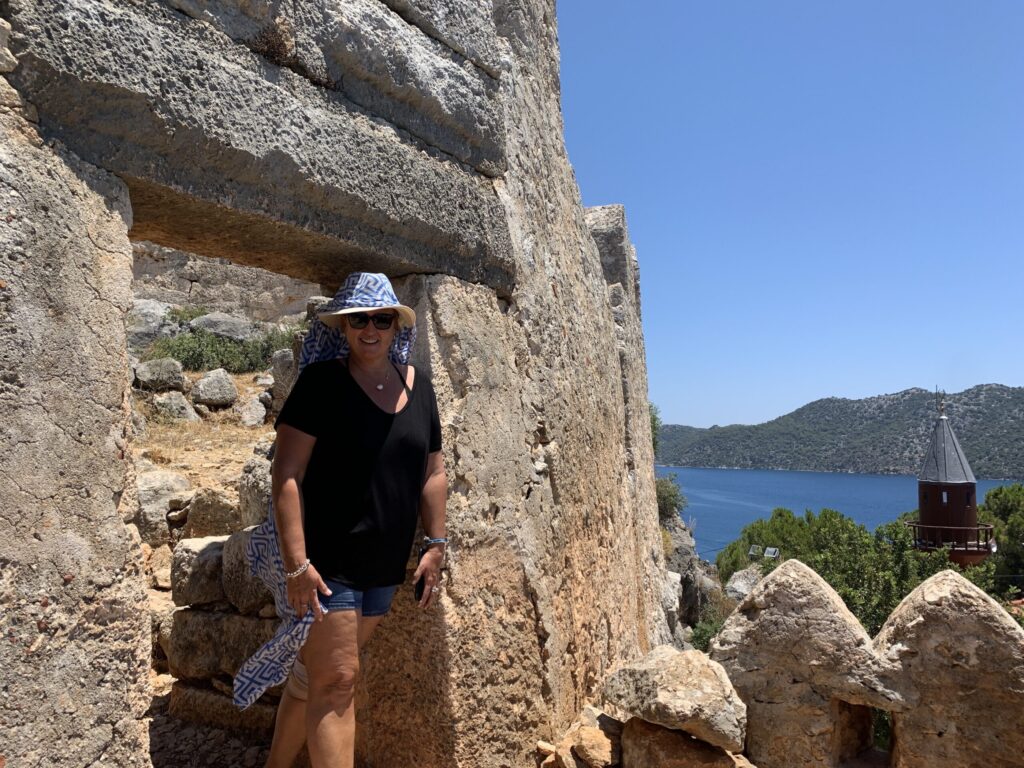 With just three days to spend, we found a cheap hotel one street up from Finikoudes and settled in. The city’s modern downtown district has a community feel and working town atmosphere, while the old Turkish quarter of Skala is full of whitewashed cottages, where the arts and crafts of the region are still kept alive. Between the two you will find the city’s landmark, the Byzantine church of Agios Lazaros and Larnaka’s little fort. Most of our time here we did absolute nothing more than going to the beach and enjoy the country’s fresh fish food options. Dedicated mostly on package tourism from the UK and the rest of Europe, we can say that while the three days were not enough, Larnaka did not exactly win us over. 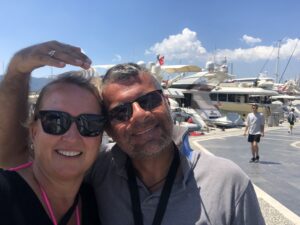 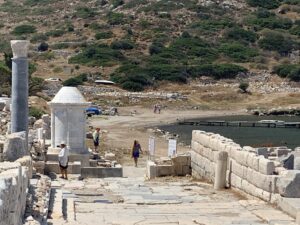 Our time in Cyprus went by fast and after almost a complete three years on the road, from the day we left Greece to start the 4,3,2,1 Hiway-1 expedition, the time had come to head home. With mixed feelings for one more time in this trip, we touched ground in Greece. Our first stop was a long, cold Freddo Espresso in Thessaloniki port, while enjoying the waterfront breeze. Let me just add here that Thessaloniki was the second city of ancient Byzantium and still is of modern day Greece. That might be the reason why Thessaloniki boasts a bit of everything. From Byzantine churches, Roman ruins and engaging museums to fine restaurants, lively cafe scene and excellent nightlife. 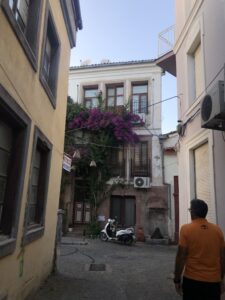 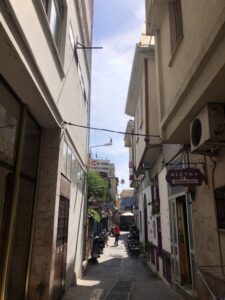 The “CITY” has it all. Honoring our traditions, as soon as Voukefalas was out of the port and after the necessary resupplies, we headed to Epanomi. In theory, this was the first place we visited three years ago when our trip started. The upcoming days we recalibrated our compass and started heading east towards Turkey. On our way, we visited some places we had stopped at during our first ever overland trip as well as some new ones. Asprovalta was one of the first stops, a lively village whose name means White Valley. Here we found a camp spot for the night in the extended prоmenаdе of the village square that holds a number of restaurants, taverns and cafes. That night, we met a young German cyclist that had been travelling on his bike through most of Europe and will complete his trip in Istanbul. Next up was Kavala, where history, culture, architectural landmarks, organized beaches and natural treasures are all in fine balance. The city rises up from the sea in an amphitheater shape and is a gem waiting to be explored. 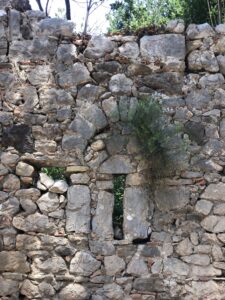 Alexandroupolis, our next stop, enjoys a lively student atmosphere that made it up for an ideal stopover. This beautiful seaside city, whose trademark is a lighthouse, forms the centre of a truly fascinating region. Add to the above a couple of more wild camps in the Evros delta and after two weeks we were at the doorstep of Turkey.

If you have been following our travels, you will probably remember that in our “Epic Journey” expedition, we traveled extendedly this beautiful country. So this time all we planned to do was to revisit some of these locations one more time. After crossing the border, we aimed first for Çanakkale, the gateway to the Gallipoli Peninsula and the watchtower of the Dardanelles. Here we found an amazing free camp in the fortified area overlooking the mouth of the Dardanelles. After a great overnight, we pushed to Ayvalık. It is a picture perfect town, with a photogenic waterfront and a labyrinth of cobblestone lanes, history-warped with picturesque shuttered houses, falling into shabbily beautiful disrepair. We spent two days in Ayvalık exploring the alleyways full of bohemian craft shops and cute cafes. 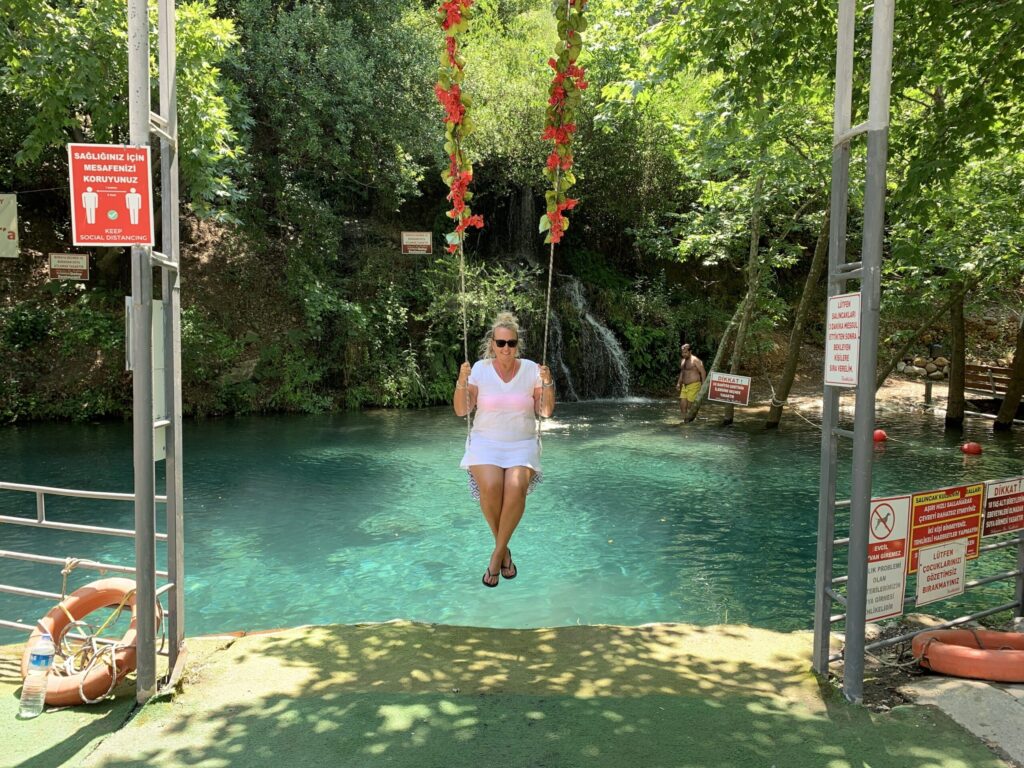 The gleaming white travertines of Pamukkale, our next stop, are among Turkey’s most famous and most popular natural wonders. The hill is carved out of calcite with shallow pools of mineral rich water, while the magnificent ruins of the Roman spa-city of Hierapolis lie on the hill summit. 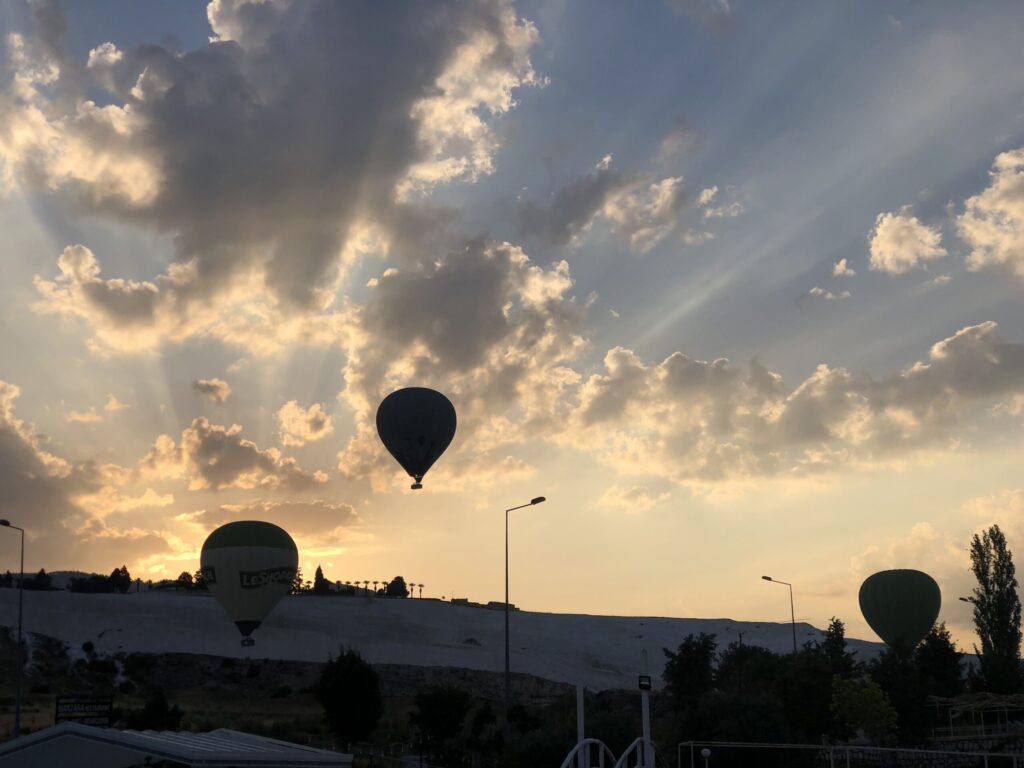 Unsurprisingly this is a day-trippers central with bus loads arriving from very early in the morning but if you stay the night like us, you will beat the crowds and stroll the travertines at sunset. That is where you will see Pamukkale at its best. Heading towards the coast, we hit Antalya, a vibrant modern hub with an ancient trick up its sleeve. Right in the city’s core is the preserved Kaleiçi (old town) district, where preserved Ottoman houses rub shoulders with chunky remnants of Roman and Byzantine walls. We spent our time exploring the small alleyways, while Rochelle was looking for things to buy but what impressed us most was the still standing Roman harbor, packed with modern day sailboats. 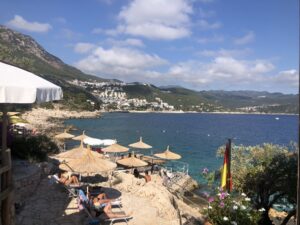 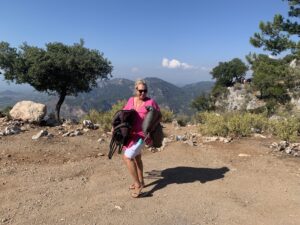 Away from the centre and where Antalya’s tourist district lies was the only option we found to camp. Not being city people, after one urban overnight camping, we restocked and headed to Olympos. This area holds the twin hamlets of Olympos and Çıralı and is a budget/hippy traveler centre with a bohemian vibe. The main things to do here is serious beach time, sunbathing, lounging and generally getting in some serious hammock time. Do not miss though the stroll down history line of Olympos side that is backed with the remnants of Ancient Olympos, which had its Lycian heyday in the 2nd century BC. With time on our side and in reality not willing to rush towards the end of our trip, we drove into Kaş, our favourite hang out place on the coast of Turkey. While other coastal towns anchor their popularity in sandy beach fun, Kaş is all about adventure activities. For divers like us, this is Turkey’s hub for underwater exploits. It is a mellow place with a postage-stamp-sized old town, a handful of ruins and the bulky silhouette of the Greek island of Meis standing sentinel just offshore. As none of the adventure activities were in our radar, we retreated in Kaş camping, a great spot on the side of the town, within walkable distance from the city’s market and right on the water. 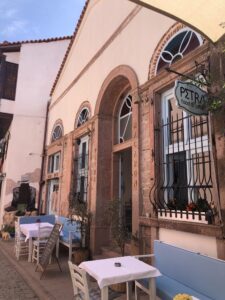 Moving onwards and after leaving the coast for a bit, we headed to Lake Köyceğiz, with its rich alluvial soils, which claims the fame of being one of the vastest coastal lakes in the country. This lake is connected to the Mediterranean through a narrow channel called “Dalyan”, which flows by the town of the same name and ends up in the beautiful Iztuzu beach and the ancient city of Kaunos. The surroundings of the lake are important nature reserves and a popular tourist attraction, as at the bunks of the lake the clay is used for mud baths. As we read online, this marvelous healing clay is indicated to treat inflammatory arthritis, gynecological disorders, and diseases of the nervous system. This unusual and effective therapy is a unique and delightful experience as a whole. With 20-odd kilometers of uninterrupted sand, our next destination the beach of Patara, takes the crown for Turkey’s longest beach. If beach-bliss isn’t already enough, the ruins of Ancient Patara, scattered along the main beach access road, have a swag of Lycian splendor to explore. Then there was Datça, a port town in southwestern Turkey that is situated on the narrow Datça Peninsula on the Aegean Sea. Eski Datça is an old neighborhood with stone roads and bougainvillea-covered walls; meanwhile at the western tip of the peninsula the ancient Greek ruins at Knidos, a trading hub during Roman and Byzantine times, completed our adventure. 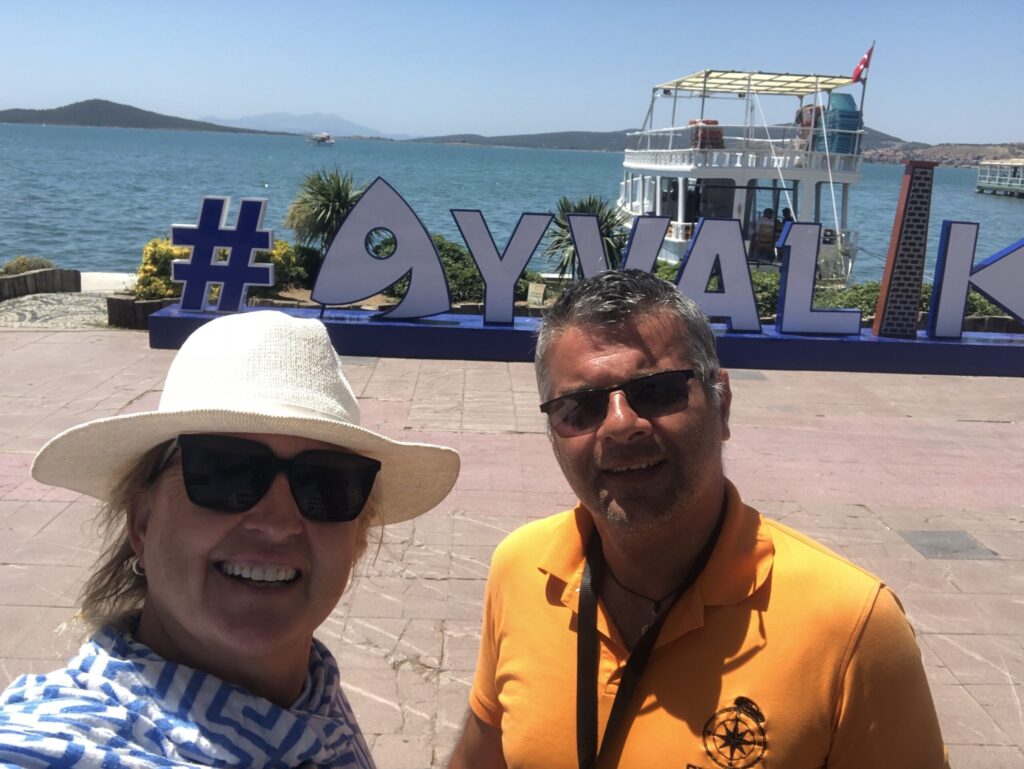 Marmaris, the loud and proud party-it-up town, is firmly stamped on the package-tourist trail. Despite the flow of sun-and-sand resort-goers, its stunning natural harbor and surrounding countryside is drop-dead gorgeous. Back on the Aegean coast, we headed to Bodrum. This once-sleepy fishing village has nowadays transformed itself to Turkey’s primo summer resort. The back lanes brim with uniformly whitewashed cottages, all sporting natty blue trims, while the waterfront’s palm-tree promenade and bobbing, shiny yachts provide the chief strolling territory for droves of holidaymakers each summer. After five days of living it up, we headed further north on the coast, where we unexpectedly found Akbük, a small “locals only” holiday town, with a permanent population of 4,000 and a summer population of 50,000. Finally we could not depart Turkey without visiting one more time the ruins of Ephesus. So after an overnight stay in the cute Selçuk, a budget-traveler favourite town, we were dazzled by the beauty of the ruins of the Roman city of Ephesus. Our last stop was Çeşme, a Turkish resort town west of Izmir, on the Aegean Sea. Çeşme Castle, a restored military fortress overlooking the harbor, was the main attraction here that now houses the Çeşme Archaeology Museum, with displays of marble busts, metal coins and artifacts from nearby excavations. After a beautiful overnight camp by the marina, the next day we boarded the ship for the final part of our trip on the Greek islands. 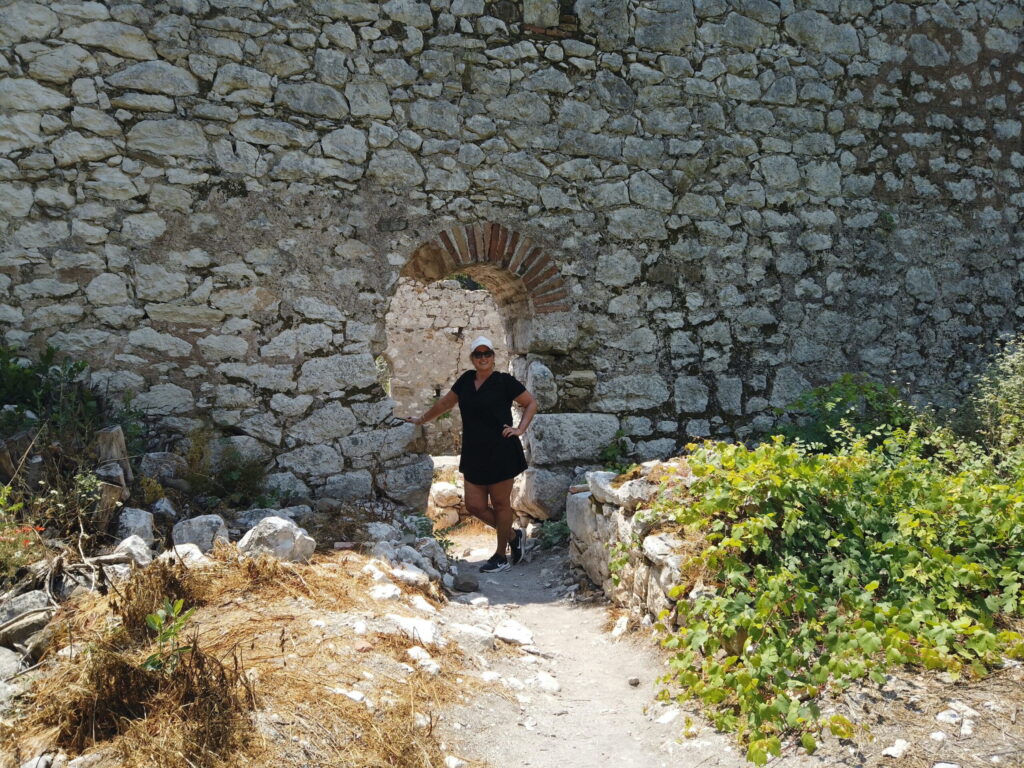 It is always sad when an expedition is heading towards its completion but for that you will need to wait for our next post when 4, 3, 2, 1 Hiway-1 finishes up with our return to Athens.