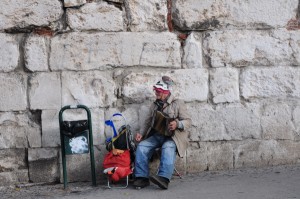 I only travelled across the Dalmatian coast of Croatia which is a very small part of the country but the prettiest one. So what you read here is just my route across the coast. I knew I was going to visit a country that had come out of a civil war so it would still be recovering. Wrong, the coast thanks to the tourist industry is in perfect shape and ready to get back to being a top destination in the Mediterranean. I arrived in Split and went to one of the many private homes that their owners have turned into low-price hostels. The one I stayed at, I had it all to myself. 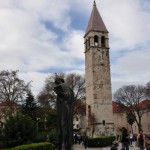 So I started exploring the Diocletian’s former palace that has been turned into an old city centre. You can find everything there, from small local bars to big name brand boutiques and cute pubs where local food is served. I was there for Christmas, my first holiday after many years of travelling in Muslim countries and missing Christmas Day. So I was really looking forward to that day. The previous day was excellent since everybody was out on the waterfront having a great party but on Christmas Day the centre looked deserted. See, the Croatians are really family people so except for myself and five more tourists I saw nobody else. Thank God the house had a kitchen for me to cook. Besides that Split was great. After finding out what happened in the civil war from the locals I met, I explored some of the coast villages on the way to Dubrovnik in the south. The coast looked like paradise even in the middle of the winter. Each village had its own character. I had to stop and explore some of them. Right above them you 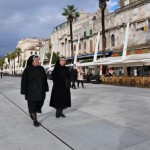 could see the mountains, steep and high. The rocky mountain edges form small bays in the Mediterranean. There are no sandy beaches but that makes the scenery even more unique and beautiful. The area up to Dubrovnik is full with camp grounds and small hotels. From what they told me in the summer months they are almost full. After camping here and there for a couple of nights, I finally reached Dubrovnik, a castle exactly in the same condition as the original inhabitants must have left it. Some parts of it were bombed by the Serbian air force but they were carefully restored since the place is a world heritage site protected by UNESCO. On the other side of the bay it’s the new Dubrovnik where I found accommodation for one more time, like in Split, in a local’s house who has turned some of the rooms into guest houses. The next day, after 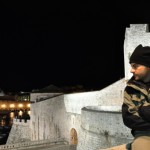 I came back from the supermarket and tried to start Voukefalas, he refused to start. Not now, I thought. The light of the immobilizer was constantly on, indicating that there was something wrong with it. I freaked out but thanks to some people from the nearby pub, I found a truck to pull me into the local auto electric shop. For two days I didn’t know what to do. The thought of having to go all the way to Zagreb, 500 km away, to a Honda dealer on a tow truck, made me realize that my whole trip depended on my car. Thank God, after talking to Honda on the phone, we managed to reactivate the immobilizer and Voukefalas was again ready to hit the road. In Dubrovnik I met a couple of New Zealanders that were travelling on bicycle and their final destination was China. They inspired me and gave me strength. After all, even when the worst things happen to you, if you have passion you can reverse the situation to your own benefit. Jane and Tom (those were their names) flew to England, bought their bicycles and started their trip all the way to China. Their plan was to be in Beijing in three years from the day they started. Now tell me, how does that sound to you? Crazy story, as they say in Kiwi land. We exchanged many tips and really got close since Tom helped me with this blog as well because he was a computer genius. In three days we analyzed many subjects and came to many conclusions about the travelling life we both decided to follow. The days went by fast and it was almost time for me to go. I try to have a general plan when I travel but in reality it never works out. Anyway, this time I decided to stick with it. I left the crazy kiwis and moved on. My next stop was the border of Bosnia and Herzegovina. But I got delayed a little because in a small village about 120 km after Dubrovnik, on the way to the border, I met some Brazilians that had a serious problem with the gear box of their 4WD Nissan and I helped them out by towing them to Trestovo. It was almost dark when I got there so I didn’t want to risk it and waited until the next day to move out. So another adventure ended at the border of Bosnia and Herzegovina.
As I mentioned at the beginning, my opinion cannot be absolutely trusted about the whole country but I’m sure that in the following years Croatia will become one of the world’s top destinations. And as the country becomes more and more prosperous, the quality of services will become higher without losing its authenticity. 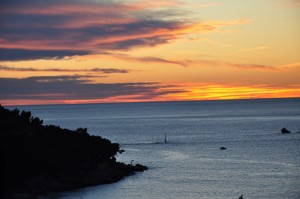